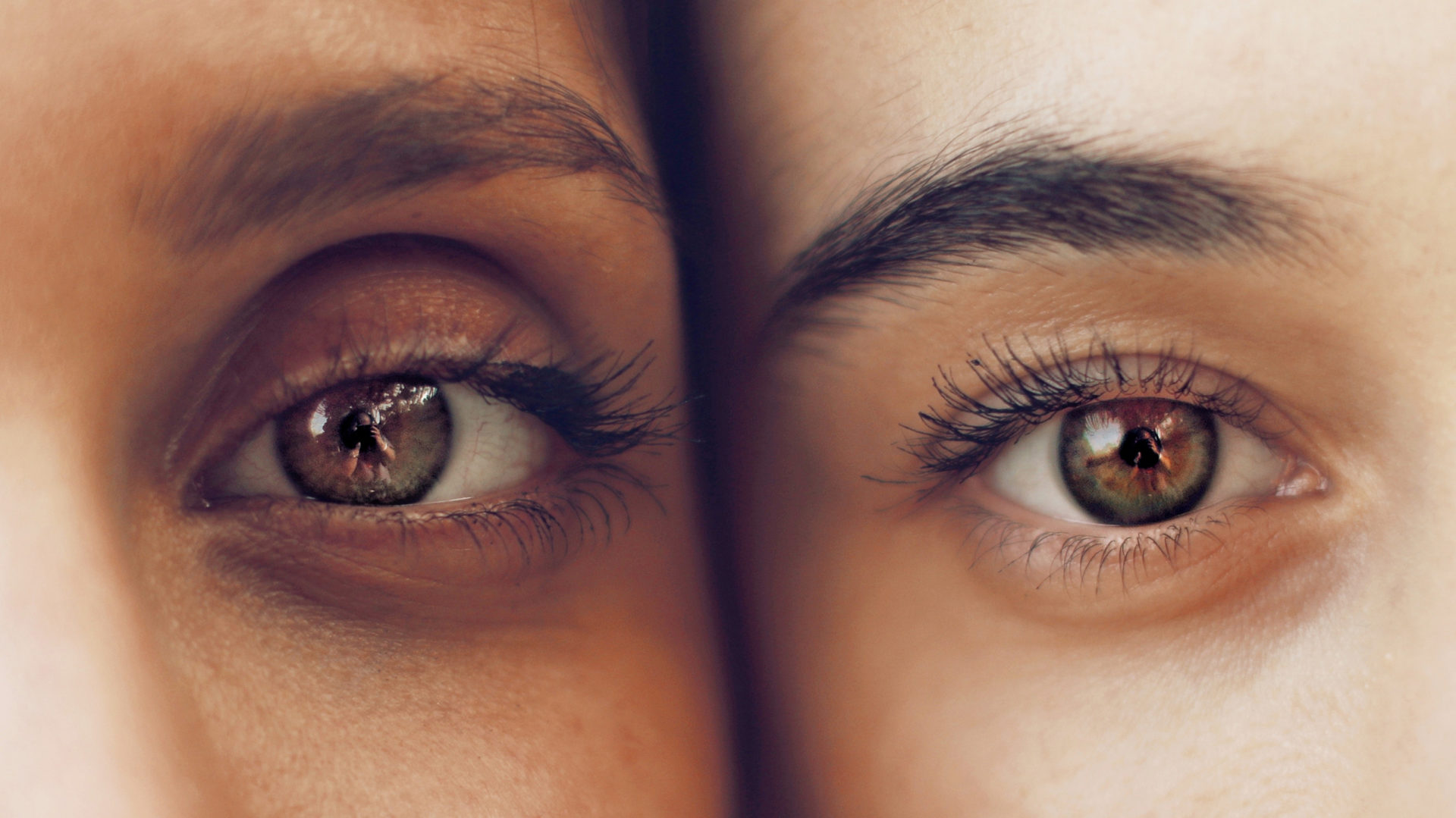 Is Eye Color Genetic? | What Your Eye Color Has to Do With Your History

Eye colors are passed down through generations, but sometimes genetic variations can lead to surprising results in eye colors. Learn about the genetics of eye color in this guide.

Whether eyes are blue or brown, eye color is determined by genetic traits handed down to children from their parents. A parent’s genetic makeup determines the amount of pigment, or melanin, in the iris of the his or her child’s eye. With high levels of brown melanin, the eyes look brown. With minimal levels of the same brown melanin, the eyes look blue. However, a genetic variation can cause a child’s eye color to be unpredictable, resulting in two blue-eyed parents having a brown-eyed child.

Eye colors have evolved over time and have roots in our ancestry. Although eye color is determined by genetic makeup, variations can cause different shades to appear. Learn more about the genetics of eye color, including:

How Is Eye Color Determined?

Genetic makeup determines the amount of melanin in the eye. In eye color, there isn’t blue or green pigment. All eye colors have the same brown melanin incapable of refracting light. The difference in eye colors is due to the concentration and location of the brown melanin on the two layers of the iris. People with brown eyes have melanin on the back layer of the iris and some on the front layer, which absorbs more light and causes the iris to look brown. Eyes with no melanin on the front layer of the iris scatter light so that more blue light reflects out, so that the eyes appear blue.

The chromosomes a child inherits carry genetic information that determines eye color. Differences in the copies received from each parent causes variations in the amount of melanin produced. A region on chromosome 15 has a big part in determining eye color. The OCA2 and HERC2 genes are located in this region.

The OCA2 gene (formerly called the P gene) provides instructions for producing the P protein located in the melanocytes (specialized cells that produce melanin). If more protein is produced, then the eyes received more melanin, and eye color leans toward the brown end of the color spectrum. When less protein is produced, the eyes receive less melanin and eye color leans toward the blue end of the spectrum. Although nearly 75 percent of eye color is controlled by the OCA2 gene, other genes provide a pathway for melanin. These genes can raise or lower melanin levels, causing a child to have more or less melanin than either parent. These variations can result in blue-eyed parents having a brown-eyed child, or brown-eyed parents having a blue-eyed child. The former is more likely than the latter.

Each cell in the human body normally contains 23 pairs of chromosomes. Chromosome 15 likely contains 600 to 700 genes integral to producing proteins. Two of these genes, OCA2 and HERC2, play a significant role in eye color selection.

Although the OCA2 gene produces the protein responsible for melanin, the HERC2 gene controls the OCA2 gene by turning its protein production on and off. The presence of at least one genetic variation in the HERC2 gene can reduce the amount of melanin produced, leading to lighter eyes. Other genes working with OCA2 and HERC2 have a smaller role, but on rare occasions override OCA2 to determine eye color.

Charles and Gertrude Davenport developed the dominant brown eye model in 1907. They suggested that blue eyes were caused by a single recessive gene, and blue-eyed parents could never produce a brown-eyed child. Dominant and recessive genes refer to inheritance patterns, and describe how likely it is for a certain trait to pass from parent to offspring.

Today, we know this model is simplistic, and that many genes determine that eye color. Although we can predict the color of a child’s eyes based on the parent’s eye colors, other genetic factors may alter the outcome.

Can Eye Color Be Predicted?

While it is possible to predict the probability of eye color, genetic factors may alter the outcome. Movie star Elizabeth Taylor’s parents probably did not predict their daughter’s rare violet eyes. Taylor’s eye color is thought to be the result of a genetic mutation in the FOXC2 gene, which causes a specific amount of melanin that produced a striking eye color and may cause double eye lashes as well as heart problems.

With eye color controlled by more than one gene, it is possible for a newborn to inherit any eye color. Predicting eye color is further complicated because it sometimes changes after birth. A baby’s blue eyes can turn brown as more melanin is deposited into the iris over the first three years of life.

What Does Your Eye Color Mean?

According to one theory, almost everyone (99.5 percent) with blue eyes might be able to trace their ancestry back to the same blue-eyed ancestor that lived in the northwest part of the Black Sea region some 6,000 to 10,000 years ago. This is based on the DNA analysis of about 800 blue-eyed people, in which only one person did not have the same blue-eye genetic mutation as the rest of the group. This mutation seems to have occurred during the Neolithic period (or New Stone Age) during the great agricultural migration to the northern part of Europe. Nearly all blue-eyed humans have this same mutation in the same location in their DNA. By contrast, brown-eyed humans have more variation in their DNA when it comes to eye color.

The majority of people in the world have brown eyes. The color brown is a result of a high concentration of melanin in the iris causing more light to be absorbed and less light to be reflected. Because of this, brown eyes are more naturally protected from the sun. This likely had evolutionary benefits similar to darker skin being able to withstand the hot sun longer. The genes responsible for skin color are closely linked to those that cause eye color.

Originally, all humans had brown eyes. Some 6,000 to 10,000 years ago, a genetic mutation affecting one gene turned off the ability to produce enough melanin to color eyes brown causing blue eyes. This mutation arose in the OCA2 gene, the main gene responsible for determining eye color. Since blue eyes have survived throughout many generations, researchers think there may have been some evolutionary benefit, though the exact reason is unknown.

Blue eyes are the result of low concentrations of brown melanin, not blue pigmentation. Less melanin allows more light to reflect back to wavelengths on the blue color spectrum, which in turn make eyes appear blue. The reason why eyes are blue is the same reason the sky is blue. Some 8 to 10 percent of humans worldwide have blue eyes.

Only about 2 percent of the world’s population has green eyes. Green eyes are a genetic mutation that produces low levels of melanin, but more than blue eyes. As in blue eyes, there is no green pigment. Instead, because of the lack of melanin in the iris, more light scatters out, which make the eyes appear green. Changes in light make lighter eyes look like they are changing colors like a chameleon.

Hazel eyes are sometimes mistaken for green or brown eyes. They are not as rare as green eyes, but are rarer than blue eyes. Only about 5 percent of the population worldwide has the hazel eye genetic mutation. After brown eyes, they have the most melanin. . The combination of having less melanin (as with green eyes) and a lot of melanin (like brown eyes) make this eye color unique.

The color combinations in shades of green, brown, and gold are endless with hazel eyes, depending on the concentration of melanin. The light scatters as it does with blue and green eyes.  As with blue and green eyes, hazel eyes may appear to shift colors depending on the light. The eye color doesn’t actually shift, perception does. It is unknown if hazel eyes developed from brown eyes or green.

How does your eye health impact your life?

Your eye health may significantly impact your everyday life, from socializing with friends to driving at night. Share your eye health experiences to help scientists better understand your eyes’ impact on your daily life. Get started here.